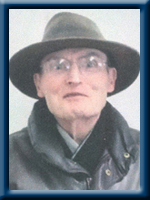 ROGERS, David Eric Goodwin, age 72 has passed away in his home in Liverpool, Nova Scotia.
David was a son of the late Harry and Lillian (Clattenburg) Rogers born into a family of 10 children.
David had a strong mind and will. He believed in doing things his way and that he was always right. When we look back, he was. David enjoyed boats, cars and flowers. Yes, flowers. At an early age, flowers brought a smile to his face.
David is survived by his brothers Norman of Liverpool, N.S., Donald of Kamloops, B.C., and sister Cathy of Scarborough, Ont. David also leaves behind stepmother Leah Rogers of New Brunswick, many nieces and nephews.
Besides his parents, David was predeceased by his brothers Paul, William “Billy” and Arnie, sisters Mary Stevens, Linda Parnell and Cindy Bagshaw.
Cremation has taken place under the direction of Chandlers’ Funeral Home, Liverpool, N.S. A graveside memorial service will be held Tuesday, May 17, 2022 at 11:00 a.m. in Trinity Anglican Cemetery, Bog Road, Liverpool, NS. Reverend Judy Cross officiating. Donations may be made to the Liverpool Salvation Army. Online condolences may be made to www.chandlersfuneral.com.

Offer Condolence for the family of Rogers; David Eric Goodwin