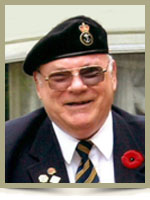 Born in Largs Ayrshire, Scotland, he was a son of the late George and Mary (Fraser) Rodger.

Scottie was Veteran of the Korean War, having served 25 years in the Royal Canadian Navy, where his main job was running the boilers on the ship. Retiring from the Navy in 1975, he moved to Liverpool to become the maintenance man for the local school district, working there for several years before finally going to work at the Queens Manor, Liverpool, also in the maintenance department. He was a member of St. Gregory’s Catholic Church, Liverpool, the Admiral Desmond Piers Naval Association and he was the current president of the Royal Canadian Legion, Branch #38, Liverpool. Scotty recently received  a Meritorious Service Medal for outstanding service to the Royal Canadian Legion and to the community. During his many years with the Legion Scottie enjoyed going to the local schools to talk to the children about the importance of Remembrance Day Activities. Over the years Scottie was very active volunteering in the Liverpool Minor Hockey Association and he also spent many seasons as the manager for the old Liverpool Schooners Fastball Team. He was a loving husband, father, grandfather and great grandfather.

He was predeceased by a brother George.

Visitation will be held Monday, March 26th, 2012, from 6:00 p.m. until 8:00 p.m., with a Royal Canadian Legion Service at 7:00 p.m., both from Chandlers’ Funeral Home, Liverpool. A Funeral Service will be held Tuesday March 27th, 2012, at 11:00 a.m., from St. Gregory’s Catholic Church, Liverpool. Father Brian Murphy officiating. Burial will be in the St. Gregory’s Catholic Cemetery, College Street, Liverpool. Family flowers only, donations may be made to the Royal Canadian Legion, Branch #38, Liverpool. Online condolences to the family may be made at www.chandlersfuneral.com

Offer Condolence for the family of Rodger; Robert “Scottie”