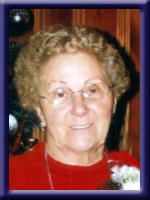 Born in Petty Harbor, NL. she was a daughter of the late Michael Robert and Catherine (Everett) Lee.

Margaret was a former PCW with Queens General Hospital, North Queens Nursing Home, Caledonia and Queens Manor, Liverpool. She was a member of St. Gregory’s Catholic Church and St. Gregory’s Altar Society. She was an honorary member of the Ladies Auxiliary of the Mersey Branch #38, Royal Canadian Legion, Liverpool and a charter member of the Lioness Club of Liverpool.  She enjoyed having people around and loved to sew and bowl.

She was predeceased by her first husband George Robinson “Bob” Whynott, her second husband Scotty Rodger, her sisters Irene Knight and Veronica Lee, her brothers Ralph, Gus, Luke and Dennis, a number of  brothers and sisters in infancy, her daughter-in-law Lynn Whynott.

Visitation will be Wednesday, March 19, 2014 from 7 until 9 p.m. in Chandlers’ Funeral Chapel, Liverpool. Funeral Mass will be held Thursday, March 20, 2014 at 11:00 a.m. from St. Gregory’s Catholic Church, Liverpool. Father Keith Billard officiating. Burial will be in St. Gregory’s Catholic Cemetery, College Street, Liverpool. Family flowers only, donations may be made to theAlzheimers Society of Nova Scotia. Online condolences may be made to www.chandlersfuneral.com.

Offer Condolence for the family of Rodger; Margaret Catherine