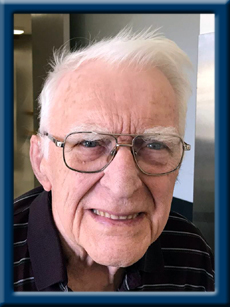 ROBLEE – John “Jack”, 92. It is with great sadness that we announce the death of Jack on May 28th, 2019 at Shoreham Village, Chester, Nova Scotia.
He was born May 14th, 1927 in Springhill, Nova Scotia and made Milton, Nova Scotia his home.
After graduating high school he became a salesman and started his successful career in the food industry. He became a salesman for Atlantic Wholesalers in St. John, New Brunswick. He was soon requested by TRA Foods (Sobeys) to come to Nova Scotia’s South Shore and open up this territory for their new warehouse. After many successful years he became manager of Liverpool operations and still later Sales Manager for the South Shore. 35 years with Sobeys went by quickly with John enjoying every day of the sale.
In retirement he enjoyed many winters in Florida, playing bridge and golf several times a week he made many lifelong friends there as well. Between his winter months in Florida he spent much of his time with Horace MacPherson his very dear friend who helped John fill his days and have purpose in his retirement.
He is survived by his sons, Douglas (Deborah) of Lincoln, NB; John (Jane) of Oxford, NS; William of NS; and daughter Jean of NS. His beloved granddaughter Wendy (Sean) Whitehead of Halifax, NS; grandson Shawn (Tina) Roblee of Red Deer, AB, great-grandsons Joel (Jennifer) Hunter of Halifax, NS, Joshua (Tiffiany) Hunter of Halifax, NS, Jory (Alicia) Hunter of Halifax, NS, Marcus Roblee of Red Deer, AB and great-granddaughters Kristen Hunter of Halifax, NS and Lauren Roblee of Red Deer, AB. Great-great -grandsons Jonah Hunter, Dax Hunter and James Hunter and great-great-granddaughter Jaina Hunter.
John was predeceased by his wife Elta.
Cremation has taken place under the direction of Chandlers’ Funeral Home, Liverpool. A graveside service for family and friends and a burial at Hillside Cemetery, Springhill, Nova Scotia will take place a later date. Donation may be made to the Juvenile Diabetes Association and online condolences sent to: www.chandlersfuneral.com
We wish a sincere thank-you to the staff of Shoreham Village who treated their “John Jack” with such dignity and love we can never repay them.

Offer Condolence for the family of Roblee; John “Jack”