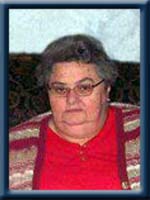 ROBERTS, Ruth Anna, 64, of Liverpool passed away peacefully on Sunday, November 11th, 2012 in Queens General Hospital surrounded by her family.

Born in Liverpool, she was a daughter of the late Joseph Allan and  Ruth Eldora (Boland) Freeman.

Anna was a former employee for Lane’s, Liverpool  and  Transcotia, Brooklyn. She will be sadly missed by her family and friends, especially her special companion Phred.

She is survived by her husband George, her son Allan (Jackie) of Liverpool and her daughter-in-law Mary of Liverpool. Her grandchildren Michael, Anna and Lorna and her great-grandchildren Ethan and Callie. Her sisters Joan (Peter) Whynot, June Wagner and Janet (St. Clair) Whynot, all of Liverpool, Elizabeth Langille of Halifax and Margaret (Allan) Hatt of Labelle.

She was predeceased by her son Troy and her sister Beverly Conrad.

Cremation has taken place under the direction of Chandlers’ Funeral Home, Liverpool. There will be no funeral service. A Celebration of Anna’s life will be held at a later date. No flowers by request, donations may be made to any charity.  Online condolences may be made to www.chandlersfuneral.com

Offer Condolence for the family of Roberts; Ruth Anna