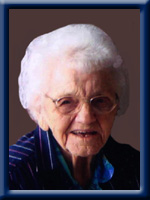 Born  August 25, 1913, in Rockland, Shelburne County, she was a daughter of the late Charles and Sadie Page.

Mary was a graduate of Normal College in 1931, she taught at several schools in Lunenburg, Queens and Shelburne Counties. Living most of her life in Port Joli and Hunt’s Point, she enjoyed quilting, crafts, playing cards and bingo. She was a member of Port Joli United Church and Wesley United Church, Hunt’s Point and also the UCW. She was the last surviving member of her immediate family.

Funeral service will be held Monday, March 7th, 2011 at 11:00 a.m. in Chandlers’ Funeral Chapel, Liverpool. Reverend Bethe Benjamin-Cameron officiating. Burial will be in Peaceful Hill Cemetery, Port Mouton. Family flowers only, donations may be made to Queens Manor, Victorian Order of Nurses, Queens County Branch, Red Cross or charity of Choice. Online condolences may be made to www.chandlersfuneral.com

Offer Condolence for the family of Robertson; Mary Ruth