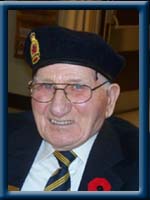 Born in Onion Lake, Saskatchewan, he was the son of the late William and Katherine (Phillips) Roberton.

George was a veteran of World War II, serving in the R.C.N.V.R with the Corvette Navy. George also held a career as a fisherman and was known as a “jack of all trades”. He worked until his retirement with Bowater Mersey Paper Company Limited in the finishing department and had a love for the outdoors especially enjoying gardening.

Cremation has taken place under the direction of Chandlers’ Funeral Home, Liverpool. A graveside service will be held Wednesday, January 25th, 2012 at 2.00 p.m. in Seaside Cemetery, Brooklyn. Lay Minister Peter Anthony officiating. No flowers by request. Donations may be made to  Mersey Branch #38 Royal Canadian Legion, Liverpool. Online condolences may be made to www.chandlersfuneral.com.

Offer Condolence for the family of Roberton;George