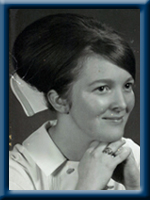 ROBAR – Peggy Ann Eugene, 66, of Liverpool, passed away peacefully in Queens General Hospital on Tuesday, May 27, 2014.

Born in Milton, Queens County, she was a daughter of the late Montford and Inez (McCoombs) Robar.

Peggy was a nurse for over thirty years working at the Nova Scotia Hospital in Dartmouth until her retirement. She loved to be outdoors gardening, camping and travelling. She enjoyed her times at the camp at Old Garden Road with family and friends. She had a love for animals especially cats and enjoyed dancing.

She was predeceased by her brother Donald.

Cremations has taken place under the direction of Chandlers’ Funeral Home, Liverpool, where a funeral service will be held Monday, June 2, 2014 at 11:00 a.m. Burial will be in Milton Community Cemetery. Family flowers only, donations may be made to the Canadian Liver Foundation or the Canadian Diabetes Association. Online condolences may be made to www.chandlersfuneral.com

Offer Condolence for the family of Robar; Peggy Ann Eugene