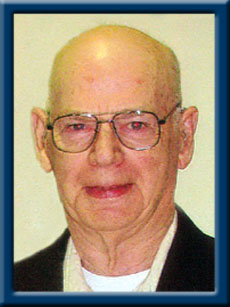 RICHARDS – Havelock “Lockie” F., 88, of Brooklyn, Queens County, passed away peacefully in Queens General Hospital, Liverpool, on Friday, August 18, 2017.
Born on Bush Island, Lunenburg Co., he was a son of the late Freeman and Theresa (Seaboyer) Richards.
Lockie worked for over forty years in the auto mechanic trade first with Steel and Engine Products Limited, Liverpool (STENPRO), Rossignol Sales Limited, retiring from Nova Scotia Power in 1992. He and his wife Dorothy were members of the Seabreeze Campers Club and enjoyed many years camping and traveling. He was considered to be a washer toss “champion” in his family and enjoyed time spent with family and friends especially with his grandchildren.
He is survived by his wife Dorothy (Croft); his daughters Donna (Gary) Keans and Nancy (David) Smith, both of Brooklyn; His sons Darrell (Michele) of Liverpool and Douglas (Tracy) of Hunts Point. Grandchildren Nicole (William) Rowter, Jeremy Keans, Angela Smith, Janessa Keans and Justin Richards and his great grandson Jayden Rowter. His brother Graham (Joyce) of Bridgewater.
He was predeceased by his grandson Kirk Smith, his granddaughter Jessica Richards; brothers Edgar, Sinclaire, Erwin and infant brother Norris.
Visitation will be Tuesday, August 22, 2017 from 7 until 9 p.m. in Chandlers’ Funeral Home, Liverpool. Funeral service will be Wednesday, August 23, 2017 at 11:00 a.m. in Chandlers’ Funeral Chapel, Liverpool. Lay Minister Peter Anthony officiating. Reception to follow in the funeral home. Burial will be in the New Brooklyn Cemetery, Highway #3, Brooklyn. Family flowers only, donations may be made to the Queens General Hospital Foundation or to the Heart and Stroke Foundation. Online condolences may be made to www.chandlersfuneral.com

Offer Condolence for the family of Richards; Havelock “Lockie” Freeman