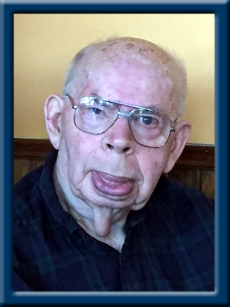 RICHARDS – Erwin L., 94, of Brooklyn, Queens County, passed away peacefully in Queens Manor, Liverpool on Saturday, February 25, 2017.
Born in Lockeport, he was a son of the late Freeman and Teresa (Seaboyer) Richards.
In his early years, Erwin was a fisherman, then became a diesel mechanic and worked for 41 years at Steel and Engine Products Limited (STENPRO) in Liverpool. He enjoyed working in his garage and even built his own diesel engine for his truck. His fishing heritage well established in his heart, he enjoyed going for drives, especially anywhere there was a wharf with fishing boats.
He is survived by his daughter Elizabeth (Mark) Bamford of Dartmouth; his son Stephen (Christa Davis) of Halifax; his grandchildren Tracey (Jeff) Woodhouse, Evan Burdock and Sean Burdock and his great grandson Parker Woodhouse. His brothers Havelock (Dorothy) of Brooklyn and Graham (Joyce) of Bridgewater. His sisters in law Ethel Richards, Alberta and Gloria Richards, Bridgewater and his brother in law Morton (Marion) Williams of Liverpool.
Erwin was predeceased by his wife Ella (Smith), his infant son David and his brothers Norris in infancy, Edgar and Sinclair.
Visitation will be Wednesday, March 8, 2017 from 7 until 9 p.m. in Chandlers’ Funeral Home, Liverpool. Funeral service will be Thursday, March 9, 2017 at 11:00 a.m. in Chandlers’ Funeral Chapel, Liverpool. Reverend Dr. Steven Hopper officiating. Reception to follow in the funeral home. Burial will be in Liverpool United Baptist Cemetery. Family flowers only, donations may be made to Queens Manor, 20 Hollands Drive, Liverpool or to a charity of your choice. Online condolences may be made to www.chandlerdsfuneral.com

Offer Condolence for the family of Richards; Erwin Leslie