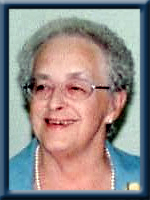 Born in Bear Point, Shelburne County, she was a daughter of the late H. Leland and Dora (Perry) Smith.

Ella taught school for a few years before deciding to enroll in the Victoria General Hospital School of Nursing program. Following her graduation in 1952, Ella worked as a registered nurse until her retirement. She was a member of the Liverpool United Baptist Church and the Ladies Auxiliary as well as the Womens Missionary Society and the WWT.  She was an active member of the Queens General Hospital Auxiliary and the Hospital Hustle. She enjoyed bowling, traveling and especially loved to spend time with her family and friends.

She is survived by her husband of 58 years Erwin, her daughter Elizabeth (Mark) Bamford of Dartmouth, her son Stephen (Sue Taylor) of Elmsdale, her grandchildren Tracey, Evan and Sean, her twin sister Ethel (Sinclaire) Richards of Bridgewater and her brother Morton (Marion) Williams of Liverpool.

She was predeceased by her infant son David and stepmother Edith Marie (Douglas) Smith.

Visitation will be Thursday, May 2nd, 2013 from 7 until 9 p.m. and funeral service will be Friday, May 3rd, 2013 at 11:00 a.m., both in Chandlers’ Funeral Chapel, Liverpool.  Reverend Steven Hopper officiating. Burial will be in Liverpool United Baptist Cemetery, Liverpool. Family flowers only, donations may be made to the Liverpool United Baptist Church. Online condolences may be made to www.chandlersfuneral.com.

Offer Condolence for the family of Richards; Ella Maude