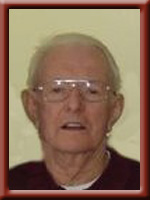 Born in Pentz, he was a son of the late Willis and Edith (Pentz) Richard.

Donald worked many years up until his retirement for the Bowater Mersey paper company. He was a member of Trinity Anglican Church, Liverpool, Order of the Eastern Star, Arbutus Chapter #30, Liverpool and the Prince of Wales #30 AF & AM, Milton. Donald was known as a jack of all trades who enjoyed woodworking, gardening, hunting and fishing.

He was predeceased by his wife Lillian, daughter Marina, sisters; Edith, Ruth and Violet and brothers; Earl, Angus, Borden and Norwood.

Cremation has taken place under the direction of Chandlers’ Funeral Home, Liverpool. A Celebration of Donald’s Life will be held Saturday, January 16th, 2010, at 2:00 p.m., from Trinity Anglican Church, Liverpool. Chaplin Donald Lawton officiating. Burial will be at a later date. Family flowers only. Donations may be made to Shoreham Village, Chester or to Trinity Anglican Church, Liverpool. Online condolences may be made at www.chandlersfuneral.com

Offer Condolence for the family of Richard, Donald Willis