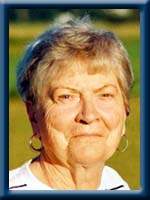 Emma Marguerite (Clarke) Rice, 91, of Liverpool has passed away on January 23, 2013 after a life well lived.

The daughter of the late Hugh Elmer and Mary Cleophalus (McAleese) Clarke, Emma was born on August 7, 1921 in her grandparents’ home at Pugwash Point, and grew up on the surrounding seaside family farm.

Emma attended Provincial Normal College in Truro, graduating in 1942.  After a time in the Cumberland County schools, Emma moved to Liverpool, touched the lives of a thousand or more fourth grade schoolchildren over a thirty-five year teaching career and eventually became the last Principal of the Liverpool Academy.  Emma met her husband, George Howard Rice, on a blind date soon after Howie returned home to Queens County from overseas duty during World War II.   They were married on July 2, 1947 in the parlor of Emma’s family home.  After their working days were done, Emma and Howie enjoyed a long, happy and healthy retirement split between Pugwash Point and their home base in Liverpool.

Emma was an active member of the Liverpool United Baptist Church congregation, serving as a Deacon for many years and then as an Honorary Deacon to the end of her life.

Howie, her devoted husband of 62 years, pre-deceased Emma, as did her older brother, Elmer.

Visitation will be at Chandlers Funeral Home, Liverpool, on Saturday, January 26th from 4-6 p.m.  A funeral celebration of Emma’s life will be held at United Baptist Church, Liverpool, on Sunday, January 27th at 1:30 p.m.  Burial will be in Zion United Cemetery, College Street, Liverpool In lieu of flowers donations may be made to Queens Manor Home for Special Care in recognition of the extraordinary service that remarkable institution and its caring staff provide to the citizens of Queens County. Online condolences may be made to www.chandlersfuneral.com

Offer Condolence for the family of Rice; Emma Marguerite