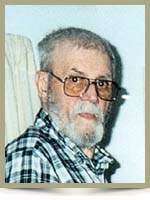 Born in Charleston, Queens County, he was  son of the late Charles and Odessa (Frances) Rhyno.

Royce was a veteran of the Korean War. He was a member of the Royal Canadian Legion, Branch #24, Bridgewater.

Cremation has taken place under the direction of Chandlers’ Funeral Home, Liverpool. A Graveside Service will be held on Wednesday, March 28th, 2012, at 10:00 a.m., from the Old Charleston Cemetery. Reverend Judy Cross officiating. Family flowers only. Donations may be made to the Nova Scotia Heart and Stroke Foundation, the Canadian Cancer Society or to a charity of your choice. Online condolences may be made to the family at www.chandlersfuneral.com

Offer Condolence for the family of Rhyno; Royce Stanley