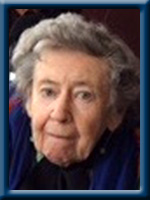 It is with heavy hearts that we announce that Rosslyn died on March 27th, 2021. She passed away peacefully at North Queens Nursing Home in Caledonia.
Rosslyn was born in Northampton England on March 4th, 1935. She was the youngest daughter of Florence and George Clarke.
She met Milton Rayner after the war, and they married in 1953. They and their son Marcus lived in Northampton until they went to Uganda, East Africa in 1963 to teach. Rosslyn loved Africa and enjoyed telling stories about her time there. They reluctantly left Uganda and went back to England in 1975. But soon they were off again to Freeport Bahamas where Rosslyn worked as a librarian and Milton and Marcus taught high school. She spent many happy hours enjoying the white sand beaches and turquoise water!
In 1983 Rosslyn and Milton returned to England for several years until they fell in love with the South Shore of Nova Scotia while on holiday visiting Marcus and Deb in Port Medway. In 1991 they retired and immigrated to Canada where they took up residence in Beach Meadows. Rosslyn made a lovely home full of beautiful things. She was an inspired and creative homemaker who enjoyed displaying her cherished collections of treasures gathered on their travels. Rosslyn was an avid reader, crafted amazing needlework pieces, and cooked delicious meals.
Rosslyn was predeceased by her husband Milton, her parents, her brother Jack and sister Marjorie (Mawby). She leaves to mourn her adored son Marcus and daughter-in-law Deb. Cremation has taken place.
Thanks to Queens Homecare for their help allowing Rosslyn to stay in her beloved home for several more years and thank you to the staff of North Queens Nursing Home for their kind, compassionate care of Rosslyn over the past several months

Offer Condolence for the family of Rayner; Rosslyn Elizabeth