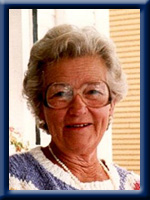 Born March 3rd, 1920 in Melvern Square, Annapolis County, she was the daughter of the late William and Nellie (Morse) Spurr.

Following high school Betty graduated from Nova Scotia Teachers College and taught home economics in Shelburne. Betty and Merrill were married in 1943 and resided in Liverpool from that date. Betty was an avid golfer and curler and served as President of the local clubs and both provincial organizations. She was the founding President of the Atlantic Seniors Ladies Golf Association. She was a member of Zion United Church, a life-long member of the Liberal Party and a member of a wide variety of community organizations where she served in various capacities.

She was predeceased by her husband Merrill; son David; grandson Jeffrey and brothers Cameron and Lawrence.

Cremation has taken place under the direction of Chandlers Funeral Home, Liverpool. A Memorial Service will be held Sunday, May 9th, 2010, at 2:30 p.m., from Zion United Church, Liverpool. Reverend Joanne McFadden officiating. Burial will be in the Zion United Church Cemetery, College Street, Liverpool at a later date. Family flowers only. Donations may be made to the Zion United Church, Liverpool, VON Queens County Branch or to a charity of choice. The family would like to thank Dr Tim Woodford and the staff at Queens General Hospital for their wonderful help and support Online condolences may be made at www.chandlersfuneral.com

Offer Condolence for the family of Rawding, Elizabeth