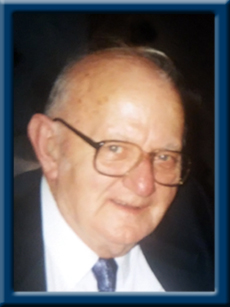 Patrick Graham Randall was taken from his loved ones on Thursday, February 23, 2017, at Hillside Pines Nursing Home for Special Care, Bridgewater surrounded by his family.
Graham was born and raised in Halifax’s North End and was the son of George and Ellen (Hughes) Randall.
Graham is survived by his loving wife, Barbara, whom he married on August 18, 1956, after a four-year courtship. On their wedding day, they moved and settled in Liverpool where Graham began his 35-year career with Bowater Mersey Paper Company Limited’s Personnel Department. They raised four children in their loving home on William Street.
Graham enjoyed many sports, his favorite being Baseball; his favorite team, as many know, was the Boston Red Sox. He also coached Minor Hockey, enduring those early Saturday morning practices with his team.
One of Graham’s favorite things was spending time on Summerville Beach with his family. Graham and Barbara shared many trips in their retirement; a European tour for their 50th anniversary, road trip with their long-time friends Madge and Dave Driscoll to Vermont, and a trip by train through the Rocky Mountains, to name a few.
Of all, the most important thing to him was his family and his desire for them to be happy and self-sufficient, no matter what path they took in life.
Graham and Barbara moved from Liverpool to Bridgewater seven years ago. Since that time, they have been blessed to have Lori and her husband Paul close by for whatever needs were required. In June of 2016, Graham moved to Hillside Pines Home for Special Care, shortly followed by Barbara in September.
Along with his wife, Barbara, Graham is survived by his children Lori (Paul Whynot) Bridgewater, Robert (Lois), Halifax, Debra (Stephen Graham), Dartmouth, and Diane Hatt, Port Medway, brother Hughes (Sheila), Halifax. He is also survived by his grandchildren Patrick (Stephanie) and Jamie Whynot, Allison and Melissa Randall, Zavin Graham, and Randi (Robin) Lake. Graham also had 3 great grandchildren, Nyah, Rory, and Rylee, along with many nieces and nephews.
Along with his parents, Graham was predeceased by his sister Lorraine and brothers John (Jack) and two in infancy Joseph and Darrel.
Cremation has taken place under the direction of Chandlers’ Funeral Home, Liverpool. Visitation will be held Wednesday, March 1, 2017 from 7 until 9 p.m. in Chandlers’ Funeral Chapel, Liverpool. Funeral mass will be Thursday, March 2, 2017 at 11:00 a.m. in St. Gregory’s Catholic Church, Liverpool. Father Charles Offor officiating. In lieu of flowers, donations can be made in his name to Hillside Pines Home for Special Care or to a charity of your choice. Online condolences may be made to www.chandlersfuneral.com.
We wish to express our immense gratitude to all the staff at Hillside for their exceptional care and loving compassion. They have made his remaining time with us memorable.
GO RED SOX!!!!!!

Offer Condolence for the family of Randall; Patrick Graham