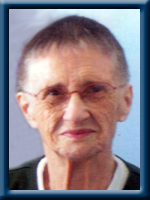 Born in Greenfield, she was a daughter of the late Walter and Lottie (Foster) Fraser.

Ivy was a member of the Greenfield United Baptist Church.

She was predeceased by her husband Gordon, her sister Irene Robertson and her brother Burton.

Visitation will be Wednesday, August 20, 2014 from 12:30 until 2:00 p.m. immediately followed by a funeral service at 2:00 p.m. both in Chandlers’ Funeral Chapel, Liverpool. Reverend Wade Harvey officiating. Burial will be in Pine Rest Cemetery, Greenfield. Family flowers only, donations may be made to Greenfield United Baptist Church Sunday School, Women’s Missionary Society or the Pine Rest Cemetery Fund. Online condolences may be made to www.chandlersfuneral.com

Offer Condolence for the family of Ramey; Ivy Medora