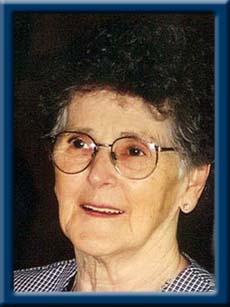 RAMEY – Barbara R., 91, Liverpool.
It is with heavy hearts that we, the children of Barbara Ramey announce her passing in Queens Manor, Liverpool on Tuesday, May 16, 2017.
Born in South Brookfield, Queens County, she was a daughter of the late Marie Zwicker.
Barbara was a former worker at Hillsview Acres. She will be fondly remembered as an amazing woman, the glue that held us altogether. Her generous and giving spirit will never be forgotten. She loved her family deeply. We will always feel this love in our hearts and her spirit will always be with us.
She is survived by her daughters Kim (Wayne) Barry of South Brookfield, Sheri Ramey (Cyril Corkum) of Bridgewater, Julie (Orve) Meisner of South Brookfield, Phyllis (Bill) Barnaby of Halifax, Joanne McCarthy (Rick Croft) of Brooklyn, Carolyn (Dick) Henneberry of Liverpool Bonnie Ramey (Jeff Emenau) of Liverpool. Son Gerald of Danesville. 15 grandchildren, 15 great grandchildren and 1 great great grandchild. Her sisters Jean DesRosiers of South Brookfield, Shirley Fralic of Clarence, Brother Paul “Jr.” of PEI. Daughters in law Debee Ramey of Bridgewater and Debbie Ramey of BC.
She was predeceased by her husband Harold, infant daughter Linda and sons Philip and John.
Cremation has taken place under the direction of Chandlers’ Funeral Home, Liverpool. A private family graveside interment service will be held at a later date in Pine Rest Cemetery, Greenfield. No flowers by request, donations may be made to Queens Manor, Liverpool. Online condolences may be made to www.chandlersfuneral.com
“Fly away, dear mother, be free”

Offer Condolence for the family of Ramey; Barbara Rosamond