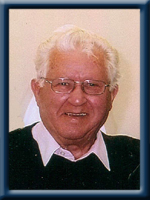 Rafuse; Roger Eugene, age 91, of Milton, Queens County, passed away peacefully on Wednesday, September 21st, 2016, in Queens General Hospital, Liverpool.
Born in Milton, he was a son of the late Harvey and Edith (MacLeod) Rafuse.
Roger received his education in Milton and, at age 17, he joined the RCAF, receiving his basic training at Lachine, Quebec and was posted to Gander, NFLD where he served most of his service time from 1943 – 1946. He received his discharge at Greenwood, N.S.. Later, with his wife Mary, he moved to Sudbury, Ontario and worked for the Frood Stobey Nickel Mine. He returned to Liverpool and was an employee for Bowater Mersey Paper Co., Ltd. for 40 years until his retirement in 1986. He was the last surviving member of his immediate family.
Roger was very active in sports for many years, playing baseball, softball, hockey and bowling. He had a keen interest in country music. With guitar in hand and joining friends, he played in variety shows and entertained at Senior’s homes. He was one of the founding members and a director of the Hank Snow Country Music Center in Liverpool as well as a member of the Hank Snow Society.
At the time of his death, he was an active member of Prince of Wales Lodge #29, Milton and Arbutus Chapter #30 of the Order of Eastern Star, Milton. Queens Chapter #34 of the Order of Eastern Star, Mersey Branch #38, Royal Canadian Legion, Seniors Activity Group and Trinity Anglican Church, all of Liverpool. Roger was a good friend and will be sadly missed by all who knew him here and in the USA.
Roger is survived by his son, Wayne (Susan), of Liverpool; grandchildren Bren and Ali; good friend and companion, Esther Legge; a number of nieces and nephews. He will also be missed by his loving cat, Friskie.
Roger was predeceased by his loving wife Mary (Whalen) of 52 years; sister, Dorothy; brother, Ralph.
Visitation will be held on Sunday, September 25th, 2016, from 7:00 – 9:00 p.m. in Chandlers’ Funeral Home, Liverpool. A Legion Memorial service will be held at 7:00 p.m. followed by a Masonic memorial service and an Order of Eastern Star memorial service. Funeral Service will be held on Monday, September 26th, 2016, at 11:00 a.m. from Trinity Anglican Church, Liverpool. Reverend Bonnie Baird and Reverend Judy Cross officiating. Burial will be in Trinity Anglican Cemetery, Bog Road, Liverpool. Family flowers only. Donations may be made to a charity of your choice. To share memories or condolences please visit www.chandlersfuneral.com.
The family would like to thank the nurses at Queens General Hospital and also a special thank-you to Dr. Woodford for the care he gave to Roger.

Offer Condolence for the family of Rafuse; Roger Eugene