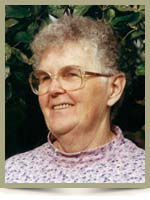 QUINN – Vivian Louise. It is with heavy hearts that we announce the peaceful passing on December 30th, 2011 at Queens General Hospital, Liverpool.

Born September 19, 1927, she was a daughter of the late Iola Coolen and the late J. Malcolm MacDonald.

For most of her adult life, she worked in Liverpool and Timmins, Ont., retiring back to Nova Scotia in 1985.

Cremation has taken place under the direction of Chandlers’ Funeral Home, Liverpool. A celebration of Vivian’s life will be held Saturday, April 21st, 2012, at 2:00 p.m., from the Liverpool United Baptist Church. Reverend Steven Hopper officiating. Burial will be in the Zion United Church, Cemetery, Payzant Street, Liverpool.  In lieu of flowers, donations in Vivian’s memory may be made to a charity of your choice. Online condolences may be made to www.chandlersfuneral.com

Offer Condolence for the family of Quinn; Vivian Louise