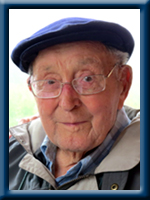 PURDY – Donald B. 101, of Liverpool, Queens County, passed away peacefully in Valley Regional Hospital, Kentville on Wednesday, May 28, 2014.

Born in Liverpool, he was a son of the late Thomas Purdy and Viola Wamboldt.

Donald began working at age 15 joining his father fishing off Sable Island and the Grand Banks. He later found work assisting in the wiring of the Mersey Paper mill in Brooklyn before once again returning to the sea as captain and guide for tuna fishermen. With a penchant for cars and motors, he soon joined Rossignol Sales, Liverpool, retiring at 66. For the next 10 years, he embarked on his second career as owner/operator of a lawn mower repair business. He will be remembered as a kind, soft-spoken, gentle man with the ability to fix “anything”.

He will be sadly missed  by his daughter Donna (Barry) Cox of Toronto; granddaughters Tracey Cox (Steve Helston), Sherri Cox and Dana Cox, his brother Joe of Milton, his half-sisters Modena Reske and Myra Ellsworth and half-brother Leon.

Offer Condolence for the family of Purdy; Donald Basil