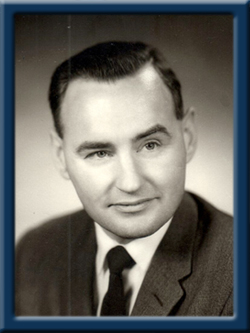 Pitblado – John, 94, of Liverpool, Queens County, passed away peacefully in Queens General Hospital, Liverpool on Sunday, November 24, 2019.
Born in Montreal, PQ, John was a son of the late Charles and Annie (Morrison) Pitblado.
John, was a veteran of World War 2 where he was trained as a pilot, bombardier and navigator. Due to his proficiency in those areas, he was kept on as an instructor for those 3 fields till war’s end.
Thereafter, he married circa 1946, and there were 4 children from that union. Three of those children died over time. One of those children, Ann, through the grace of God and advances in modern medicine, was able to overcome many years of estrangement and was driven by her daughter, a warm, compassionate registered nurse, Lee Pitblado-Rayworth, to John’s bedside for a few hours the day before he passed. There they had quality time with Jonathan and Linda Pitblado.
John was manager for Sun Life insurance for the Atlantic Provinces from 1946 to 1962. He then moved, with second wife Beryl, whom he met in Liverpool, and infant son Jonathan, to Portland Maine, where he was manager for Sun Life for the state of Maine.
While in Maine, John and Beryl, with 2 friends, started a school for intellectually challenged kids in the basement of their church- that school was taken over by the State of Maine and continues to this day. He was a deacon in that church, an active Mason and an active Shriner.
John and Beryl and young Jonathan moved back to Liverpool in 1973 and John decided to semi retire to help guide Jonathan- John worked as a Sun Life agent. He often played tennis and attended Masonic Lodge.
Never one to shy away from helping the community, John was president of the Liverpool Tennis Club in the late 1970s and was also president of the local Scouting organization and the curling club around the same time. He was also very active in the Kiwanas Club for many years.
John made it to the provincial championship for curling in the mid 1980s with Jonathan. He was also a world class bridge player and played in tournaments across North America. Most importantly, John was an excellent husband and father and was a back up minister for the United Church for many years and handled services across the South Shore when ministers were away.
John and Beryl wintered in Wilmington, North Caroline for about 25 years.
He would want the congregation of 1st St Andrews Presbyterian Church there, as well as the United Church congregation in Liverpool to be thanked for their group prayers that brought him back from death on the operating table for colon cancer in 2001.
John would also want, as do his son Jonathan and wife Linda, the congregants and the Reverend Carol Smith of Zion United Church in Liverpool to be thanked for their many visits while he was housebound and in the hospital. He would also appreciate the kindness, and professionalism of the Chandlers’ Funeral Home staff.
John is survived by his son Jonathan, his wife Linda, his step grand son Rob Holtom (aged 31), step great grandson Max, (age 2), grandchild Mark (age 21) and grandchild Andrew (age 19).
John was predeceased by his wife Beryl (Randall), his sister Charlotte and his brother James.
Cremation has taken place under the direction of Chandlers’ Funeral Home, Liverpool. A private family interment will take place at a later date. No flowers by request, donations may be made to a charity of your choice. Online condolences may be made to www.chandlersfuneral.com.

Offer Condolence for the family of Pitblado; John