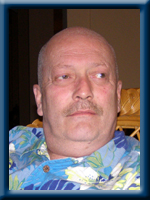 PERRY – Jamel C., 55, of Mill Village, Queens County, passed away peacefully at home on Wednesday, May 13, 2015 surrounded by his loving family.
Born in Sandy Point, Shelburne Co., he was a son of the late George Perry and Helen (Manthorne) (Perry) Vaughan.
Jamel was a fisherman all his life. He enjoyed fishing, hunting, trapping (did I say fishing…?) He played broomball in his earlier years. He was owner and operator of his own lobster boat for a time before selling his boat to work for Mersey Seafoods. He will be fondly remembered as an excellent cook.
He is survived by his wife, the former Rhonda S. MacEachern, his host daughter Yagmur Unsal of Ottawa, his step-father Robert Vaughan of Mill Village and his brothers James “Jim” (Cindy) of Shelburne, Joseph of Hidden Lake, Labelle, Jeffrey (Ann) of Maple Ridge, BC.
Cremation has taken place under the direction of Chandlers’ Funeral Home, Liverpool. Visitation will be Sunday, May 17, 2015 from 7 until 9 p.m. in Chandlers’ Funeral Home. Funeral service will be Monday, May 18, 2015 at 11:00 a.m. in Trinity Anglican Church, Liverpool. Reverend Judy Cross officiating followed by a reception. Family flowers only, donations may be made to Trinity Anglican Church. Online condolences may be made to www.chandlersfuneral.com

Offer Condolence for the family of Perry; Jamel Curtis