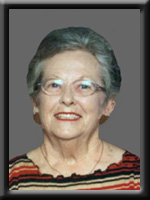 Born in Liverpool, she was a daughter of the late Fred and Jessie (Feener) Stafford.

Marjorie’s life encompassed raising her three girls while pursuing her own career. Early on, she worked as a telephone operator and florist as well as a pharmacy assistant and home support worker. She became an LPN and was one of the original care workers when Queens Manor opened its doors. She was a personal care worker at Cartier House, Home For The Aged  in Coquitlam, BC. Her hobbies included ceramics, curling, sewing, knitting, reading mystery novels and music.

She courageously moved west to BC in 1982 after 51 years in Liverpool. As she continued her nursing career, she met and married Fred Pedersen. Together, they retired to Victoria where she remained active in arts and crafts, sewing and curling. She finally retired to good old Nova Scotia in 2005, settling in Bridgewater, which enabled her to reunite with life-long friends and family members.

Marjorie will be remembered for her twinkling blue eyes, her jokes and pranks and the laughter that followed as well as her love of music. Always ready for fun with great friends, she’d grab anyone who would dance to come “Boogie” with her! She was a daughter, sister, wife, mother, grandmother, great-grandmother and friend; she was a “shining star”.

She is survived by her daughters Sandy Tonello-Greenfield of Richmond, BC and Crystal (Alton) Smith of Mersey Point. Grandchildren Kerri Nickerson (John MacNeil) of Halifax, Stephen Nickerson of Summerville, Macartney Tonello-Greenfield of Vancouver, BC, Hayleigh Smith of Mersey Point and great-granddaughter Olivia MacNeil of Halifax. Brother Merrill (Elsie) Stafford of Bridgewater, sisters Grace (Jim) McAvoy of Halifax and Reta (Glenn) Joudrey of Windsor as well as many nieces and nephews..

Cremation has taken place under the direction of Chandlers’ Funeral Home, Liverpool where a memorial service will be held Friday, February 25th, 2011 at 11:00 a.m.. Family flowers only, donations may be made to Heart and Stroke Foundation of Nova Scotia, Canadian Cancer Society or the Alzheimer Society of Nova Scotia. Online condolences may be made to www.chandlersfuneral.com

Offer Condolence for the family of Pedersen; Marjorie Louise