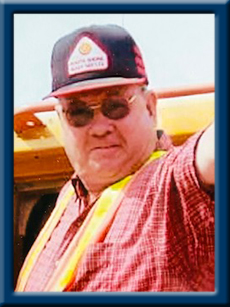 It is with sad hearts that the family of the late Bruce Peach of Caledonia, Queens County, announces his passing. Bruce passed peacefully on Feb 3rd in Queens General Hospital, at the age of 79, with his daughter by his side.
Bruce leaves to mourn his daughter Denise (John) of Hebbville, granddaughter Lily, son Melvin (Nikki) of St. John’s, Newfoundland, grandson Kyle, his partner Carolyn Conrad of Caledonia, his sister Dianne (Theodore), South Brookfield, brother Harlen, Bridgewater as well as a large circle of extended family and friends.
Bruce was predeceased by his wife, Carolyn, parents in law, Bernard and Lois Chute, mother, Reta Peach, brother, Atley Peach and nephew, David Peach.
Bruce believed in hard work, and took great pride in everything he did. He spent his entire career operating heavy machinery which he did for many years for Willis Forrest at the mill in Caledonia prior to joining the Region of Queens, where he worked until retirement. His strong work ethic was more than admirable and made him a very valued employee.
Those who knew Bruce, appreciated his zest for life. His positive energy, contagious laugh and ability to strike up a conversation with anyone are only a few of his memorable traits. Upon retirement, Bruce kept himself busy everyday and didn’t believe in idle time. He enjoyed bluegrass and other music events, playing cards with friends, going to yard sales and spending time with family and friends at various social and family events.
Bruce was very involved with the local community, particularly with the North Queens Fire Association in his younger years and most recently with the Queens County exhibition. He spent many hours at the exhibition grounds helping with whatever needed to be done. His generous nature and desire to help the community gave him pleasure.
Bruce was devoted to his family and was never more than a phone call away. He was particularly fond of his granddaughter Lily and made sure she knew she could always count on Grampy.
Over the past two years, health issues started to limit Bruce’s physical ability but he was never one to complain. He was on the go as much as possible and when asked how he was feeling, he was always “A1.”
Due to his physical and cognitive decline, Bruce spent the last four months of his life at Queens General Hospital. The care he received from the healthcare team on the medical unit was exceptional. Even though he could no longer be at home, his care was personalized and he was made to feel like family. There were many middle of the night bologna sandwiches enjoyed!
Despite the sadness we currently feel, the memories we have of Bruce and his boisterous, larger than life personality will live on forever.
Cremation has taken place and there will be no service at Bruce’s request. No flowers or donations in Bruce’s memory. Online condolences may be made to www.chandlersfuneral.com

Offer Condolence for the family of Peach; Bruce Kyle