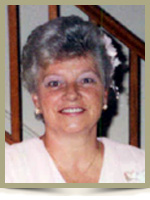 Parsons, Diana Jean, 69, of Harmony, Queens County, passed away on Friday, September 7, 2012, in the Queens General Hospital, Liverpool. Born in Belleville, Ontario, she was a daughter of the late Ivan and Margaret (Hopkins) Richards. Over the years she was involved in many of her children’s activities whether it was being a girl guide leader, hockey, volleyball, basketball, air cadet Mom ect.. Diana loved to work in her flower garden and doing many crafts including knitting, making Barbie doll clothes, ceramics and embroidering. She also made homemade ornaments for all of the grandchildren which they will treasure forever. She is survived by daughter Jennifer (Pat) Frail, of Westfield; son Joseph Callaghan, of Brooks, Alberta; stepdaughter Callie (Kevin) Uhlman, of South Brookfield; stepson Robert (Cathy) Callaghan, of Toronto; grandchildren Joel, Amber, Steven, Kyle, Brittany, Jeremy; step grandchildren Cara, Korbin, Jason; sisters Barbara (Don) Blondeau, Meredith Goulet, Brenda (Jim) Parent, Karen (Taz) Richards, all of Ontario; brothers Robert (Giselene) Richards, James Richards, Ivan (Melva) Richards, Neil (Lyann) Richards, all of Ontario; sister-in-law Claudette Richards and several nieces and nephews. She was predeceased by husbands Fred Callaghan, George Parsons; companion Melburn Scott; daughter-in-law Tammy Callaghan, sister Margaret Merrigan; brothers John Richards and Ken Richards. Cremation has taken place under the direction of Chandlers’ Funeral Home, Liverpool. A Graveside Service will be held Sunday, September 16th, 2012, at 1:00 p.m., in Hill Crest Cemetery, Westfield. Pastor Victor Adams officiating. No flowers by request, donations may be made to the North Queens Fire Association. Online condolences to the family may be made at www.chandlersfuneral.com

Offer Condolence for the family of Parsons: Diana Jean