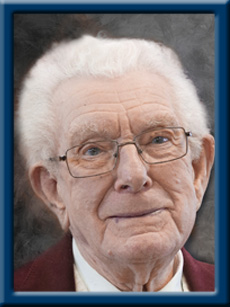 Wallace was born at home in Charleston, Nova Scotia to Elisha and Lillian (Firth). He died at the South Shore Regional Hospital, Bridgewater, at the age of 102. He left his longtime home in Brooklyn to reside at Ashwood Assisted Living in Cookville for the last several years.

Wallace’s love of driving is the theme behind most of his occupations throughout his life, beginning with being behind the wheel of a local delivery truck, working at Rossignol Garage in Liverpool, managing a food truck in Sandy Cove, driving a school bus for the Region of Queens for 31 years and installer for Oceanview Trailer Sales, White Point.

Wallace & Millie married in March of 1947. They enjoyed Square Dancing and could be found at dances on Saturday nights. He and Millie loved going to clambakes on the beach and family gatherings. They also had a cabin at Long Lake which they enjoyed immensely.

Wallace loved music and sang in the church choir. He could usually be found at the door selling tickets for local concerts. Wallace took an active interest in his nieces and nephews, enjoying time spent with them.

In the 80s, Wallace was proudly awarded a Citation of Bravery for saving the life of Donald Fisher from drowning, at Long Lake.

At his 90th birthday party, he was encouraged to speak to the crowd of family and friends. He grabbed the microphone, and after a few words, he began to sing. He was quite entertaining and had a wicked sense of humor.

Besides his parents Wallace was predeceased by his loving wife of 58 years, Millie (Clattenburg); his brothers, Malcolm, Ross, Arthur & Leon and his sisters, Mildred, Ester, Elsie, Edra & Erma.

Wallace is survived by his brother, Douglas (Judy) of Charleston; goddaughter, Wanda Baron of Charleston; his companion, Theda Carroll of Bridgewater; many nieces and nephews.

Cremation has taken place with Chandlers’ Funeral Home in Liverpool. A graveside service will be held on Tuesday, June 14th, 2022, at 2:00 p.m., from Seaside Community Cemetery, Brooklyn, Queens County. Reverend Judy Cross officiating. Family flowers only, donations may be made to the SHAID Tree Animal Shelter. To share memories or condolences, please visit www.chandlersfuneral.com

Thank you to the staff of Ashwood and a special thank you to Dr. Chaisson, staff of the South Shore Regional Hospital, and Nurse Practitioner Natasha Paul.

Offer Condolence for the family of Parnell; Wallace Harry