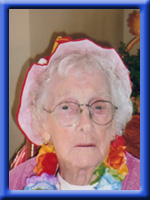 Born in Buckfield, Queens County, she was a daughter of the late Charles and Anna (Aungberg) Freeman.

Muriel was a caregiver, a waitress at the former Stedman’s Store and a cashier at the former Peoples Store in Liverpool. She enjoyed bowling, bingo, playing cards, yahtzee and gardening. She was a former Lioness, former C.G.I.T. member, an Affiliate life time member of Mersey Branch #38, Royal Canadian Legion, Liverpool as well as a member of the Friendship Club. She had a heart of gold and would do anything for anyone. She enjoyed spending time with her family.

Visitation will be Monday, September 6th, 2010 from 7 until 9 p.m. and funeral service will be held Tuesday, September 7th, 2010 at 2:00 p.m. both in Chandlers’ Funeral Chapel, Liverpool. Burial will be at a later date following cremation. Family flowers only. Donations may be made to I.W.K.-Grace Hospital, Halifax. Online condolences may be made to www.chandlersfuneral.com

Offer Condolence for the family of Parnell; Muriel Rose