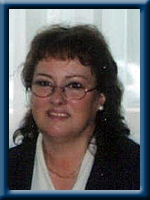 Parnell – Linda Edna Maxine, 60, of Mill Village, Queens County, passed away peacefully in Queens General Hospital, Liverpool on Tuesday, March 31,2015 with her loving husband by her side.

Born in Liverpool, she was a daughter of the late Harry and Lillian (Clattenburg) Rogers.

Linda enjoyed crafting, knitting, crocheting, gardening, baking and cooking such as pickles and preserves. She also enjoyed watching her aquarium as well as fishing with her husband Clarence. Her favorite music artist was Johnny Cash and she was known to tell the best jokes.

She is survived by her husband of 16 years, Clarence, her daughter Crystell (Todd) Wefer of Liverpool, her son Peter Wolfe (Lisa Hirtle) of Fort McMurray, AB, her grandson Brett Wefer, her step-daughter Amber of Halifax, her step-son Ashley of Bridgewater. Her sisters Mary Stevens of Port Medway, Cathy (Herbert) Carlson of Scarborough, ON., her brothers Norman (Wendy Feener) of Brooklyn, Donald (Helen) of Kamloops, BC., David of Liverpool. Her step-mother Leah Rogers of Oromocto, NB..
She was predeceased by her sister Cindy, her brothers Paul, William and Arnie.

Cremation has taken place under the direction of  Chandlers’ Funeral Home, Liverpool. At Linda’s request, there will be a private family memorial service held at a later date. No flowers by request, donations may be made to the Canadian Cancer Society. Online condolences may be made to www.chandlersfuneral.com

Offer Condolence for the family of Parnell; Linda Edna Maxine