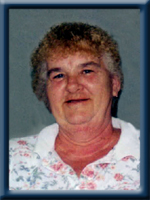 Born in Liverpool, she was a daughter of the late Herman Jollimore and Sadie Wamboldt.

Clara worked for Mersey Seafoods for 21 years until her retirement. She was an avid bingo player and enjoyed cooking. She loved her family especially her grandchildren and great-grandchildren, as well as her special companion “Angel”. She will be sadly missed, but fondly remembered by all who knew her.

She is survived by her daughter Linda (Danny) Wentzell of Liverpool; her sons Steven (Terrena) of Milton and Jimmy (Brenda) of Liverpool. Her grandchildren Daniel, Vicky, Timothy, Steven “Bub”, Taylor and Ashley and her great-grandchildren Katie, Destiny and Jordan. Her sisters Shirley Moreau of Mill Village; Eileen (Judson) Cross of Mersey Point; Susan  (Tony) Hynick  and half-sister Charlotte White, both of Liverpool. Her brothers Herbert of Beach Meadows; Sherman (Jean) and Carl (Sharon), both of Trenton, ON.

She was predeceased by her husband Douglas, her daughter Valerie, her sister Kathy Hannam and her brother Cecil and her half-brothers Merrill and George .

Visitation will be Monday evening (December 10th, 2012) from 7 until 9 p.m.  and funeral service will be Tuesday, December 11, 2012 at 10:30 a.m. both in Chandlers’ Funeral Chapel, Liverpool. Burial will be in Zion United Cemetery, Payzant Street, Liverpool. In lieu of flowers, donations may be made to the family. Online condolences may be made to www.chandlersfuneral.com.

Offer Condolence for the family of Parnell; Clara Linda