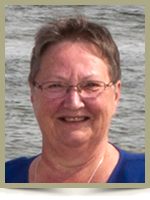 Born in West Berlin on August 21, 1939, she was a daughter of the late John and Laura (Munroe) Conrad.

Sadie moved to Halifax after finishing school to work at Merit Insurance, where she met her husband of 54 years, Reg.  They settled in Timberlea, where they raised their family, while building their cottage in West Berlin.  They started their business, Parlee & Ninos Insurance, in the mid-1960s, where they worked together until their retirement to West Berlin in 1994.

Her family came first and foremost in her life.  She enjoyed family meals, reading, playing cards with her friends and family, colouring with her grandchildren and great-grandson, she also loved her rocking chair, and living by the ocean.

She is survived by her husband Reg, sons Tim (Susan) and Glenn (Kathi)  and daughter Richelle, grandchildren Caitlin (Chad), Hilary (Corey), Jennifer and Ryan, and great-grandson Liam.  She is also survived by her sister Pheobe and many nieces and nephews.

As well as her parents, she was predeceased by her brother Leonard.

A celebration of Sadie’s Life will be held on Monday, September 23rd, 2013, at 11:00 a.m. from St. John’s Anglican Church, Eagle Head. Reverend Bonnie Baird officiating, assisted by Reverend Beth Mattinson. Burial will be in St. John’s Anglican Church Cemetery, West Berlin. Family flowers only. Donations in Sadie’s memory can be made to The Canadian Cancer Society, Queens Manor, or the Palliative Care Unit at the QEII. Online condolences may be made to the family at www.chandlersfuneral.com

Offer Condolence for the family of Parlee; Sadie Mae