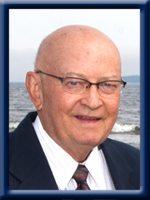 Reg moved to Halifax after finishing school to attend vocational school. He worked at Merit Insurance, where he met his wife of 54 years, Sadie. They settled in Timberlea, where they raised their family, while building their cottage in West Berlin. They started their business, Parlee & Ninos Insurance, in the mid-1960s, where they worked together for 30 years, until their retirement to West Berlin in 1994. He was always an avid lobster fisherman, first part-time and then full-time in his retirement years.

He loved the ocean and being on the water. Reg also enjoyed vegetable gardening, fishing, snowmobiling, playing cards with friends/family and vacations spent at a log cabin on Long Lake on the Eastern Shore.

He is survived by sons Tim (Susan), Glenn (Kathi), and daughter Richelle, grandchildren Caitlin (Chad), Hilary (Corey), Jennifer and Ryan, and great-grandchildren Liam and Logan. He is also survived by his sister Margaret (Bill) and sister-in-law Ethel Moser and many nieces and nephews.

As well as his parents, Reg is predeceased by his wife Sadie and siblings: Wilson (Posey), William (Ethel), Joyce (Percy)

Cremation has taken place under the direction of Chandlers’ Funeral Home, Liverpool. Visitation will be held on Wednesday, February 17th, 2016, from 7:00 – 9:00 p.m., and a Celebration of Reg’s Life will be held on Thursday, February 18th, 2016, at 11:00 a.m., followed by a reception, all from Chandlers’ Funeral Home, Liverpool. Reverend Bonnie Baird officiating. In lieu of flowers, donations in Reg’s memory can be made to Queens General Hospital Foundation or to the Nova Scotia Heart & Stroke Foundation. To share memories or condolences, please visit www.chandlersfuneral.com

Thank you to Dr. Andrew Blackadar and the staff at Queens General Hospital for their excellent care.

Offer Condolence for the family of Parlee; Reginald “Reg” Cherry