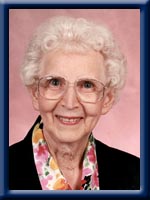 Born in Maitland Bridge, she was a daughter of the late John and Carrie (Sarty) Rowter.

Idella was a graduate of the Provincial Normal College, Truro and taught school for several years. She was a member of St. Paul’s United Church, Maitland Bridge, member of the U.C.W. , past president of the Women’s Institute and charter member of  Pearle Chapter #71, O.E.S.. Idella had a keen interest in local history and genealogy. She wrote “The History of Maitland Bridge” which she donated to the North Queens Historical Society as a fund raiser.

She is survived by her daughter Deborah (Jim Wilcox) of Halifax; grandchildren Benjamin and Amy; daughter-in-law Anna-Lise Parker of Liverpool and a number of  nieces, nephews and cousins.

Offer Condolence for the family of Parker, Idella Munro