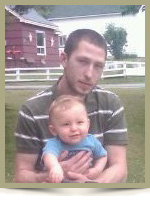 Born in Liverpool, he was the son of Lisa Ozon and stepson of Ricky Cunningham, of Liverpool.

Gordon was happiest when he was in the woods camping and fishing. He also loved working on cars, drawing, and anything to do with computers.

He was predeceased by his grandfather Kevin Ozon.

Cremation has taken place under the direction of Chandlers’ Funeral and Cremation Service, Liverpool. A Celebration of Gordon’s Life will be held Saturday, August 20th, 2011, at 2:00 p.m., from the Liverpool Fire Department, followed by a reception. Family flowers only. Donations may be made to a charity of your choice. Online condolences may be made to the family at www.chandlersfuneral.com

Offer Condolence for the family of Ozon; Gordon Murray