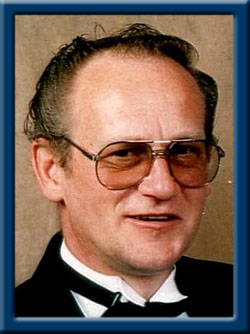 Oxner, Wayne Elden, 72, of Liverpool, Queens County, passed away peacefully on Wednesday, September 14th, 2016, in Queens General Hospital, Liverpool, surrounded by his loving family.
Born in Lunenburg, he was a son of the late Bert and Margaret (Conrad) Oxner.
Wayne had a love for the ocean and has sailed twice around the world on the scientific research vessel “The Vema”. His career was fishing and Wayne has worked on various fishing vessels, including his own, retiring at the age of 65 finishing on Clearwater’s “Artic Endurance”. His passion was woodworking and Wayne incorporated his love of the sea into various fishing boats he had made. Above all, Wayne’s family was the most important to him.
He is survived by his loving wife, Dorothy (Malone); his sons; Dennis (Kelly) and Wade (Angela), both of Liverpool; Murray (Carrie), of Alberta; his grandchildren Christopher, Kyle (Sausha), Ryan and Madisyn and his great-grandchildren Sophie, Ethan and Jasper; his sister Geraldine Hannams, of Lunenburg and many special nieces and nephews.
Cremation has taken place under the direction of Chandlers’ Funeral Home, Liverpool. At Wayne’s request, there will be no funeral service. No flowers by request, donations may be made to Queens General Hospital Foundation or to Canadian Blood Services. Online condolences may be made to www.chandlersfuneral.com

Offer Condolence for the family of Oxner; Wayne Elden