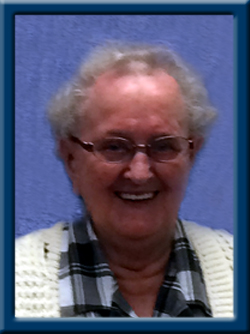 ORME – Erma Ruth, 86, of Liverpool, Queens County passed away peacefully in Queens Manor, Liverpool on Wednesday, August 17, 2016.
Born in Liverpool, she was a daughter of the late Esmond Sr. and Esther (Veinot) Whynot.
In her early years, Erma was employed with Best Yeast Brands in Brooklyn. Later, she was co-owner and operator, along with her husband Jack, of Speedy Delivery in Liverpool. Erma loved to knit and read and her time spent at the camp on Old Garden Road where the family enjoyed her turkey dinners.
She is survived by her daughters Jacqueline (Richard) Crowell of Conquerall Mills, Donna (Stephen) Hanley of Mersey Point. Her sons Jeff (Belinda) of Milton and Scott (Nicole) of Liverpool. Her grandchildren Michael (Stephanie) Robar, Michelle (Douglas) Park, John and Joel Orme. Her great grandchildren Cameron and Abby Robar, Shawn and Ian Park. Her brother Esmond Jr. (Hilda) of Lower Branch.
Erma was predeceased by her husband Jack in 2005.
Visitation will be held Friday evening, August 19, 2016 from 7 until 9 p.m. in Chandlers’ Funeral Chapel, Liverpool. Funeral service will be held Saturday, August 20, 2016 at 2 p.m. in Trinity Anglican Church, Liverpool, Reverend Bonnie Baird officiating assisted by Reverend Judy Cross. Burial will be in Trinity Anglican Cemetery, Liverpool. Family flowers only, donations may be made to Queens Manor, Liverpool. Online condolences may be made to www.chandlersfuneral.com

Offer Condolence for the family of Orme;Erma Ruth