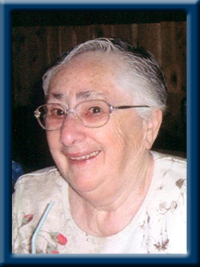 ORME – Hazel May, 87, of Liverpool, NS, passed away peacefully in Queens Manor, Liverpool on Thursday, November 12, 2020.
Born in Milton, Hazel was a daughter of the late Gordon and Georgina (Foster) Jollimore.
Hazel was a housekeeper for various families in Liverpool in her early years. She loved going for car drives, spending time outdoors at the camp with family and friends and her dog “Bear”. Hazel was an avid reader and enjoyed “Archie” books. One of Hazel’s memories was of a time spent in Halifax with her sister, Betty, during World War II, when the air raid siren went off and they were forced to spend the night sleeping on Citadel Hill until the threat was gone. Her fondest memories were of her children and grand children being born and being by the ocean. When Hazel went to live at Queens Manor, she found a best friend in Glenda Cunningham whom she spent many hours with.
Hazel is survived by her daughter Eleanor (Sherman) Roberts of White Point, N.S., sons Wayne (Wendy) and Terry (Donna) both of Milton, N.S.; grandchildren Jacob Roberts, Benjamin and Nicolas Orme.
Besides her parents, Hazel was predeceased by her husband Edward “Eddie”, granddaughters Danielle and Sarah and her sister Betty Procter.
Cremation has taken place under the direction of Chandlers’ Funeral Home, Liverpool, NS., A memorial service will take place Tuesday, November 17, 2020 at 11:00 a.m. in Chandlers’ Funeral Chapel, Liverpool, N.S. followed by reception. Burial will be in Milton Community Cemetery, Milton, N.S. Family flowers only, donations may be made to the Queens SPCA, Queens Manor, Liverpool or charity of choice. Online condolences may be made to www.chandlersfuneral.com

Offer Condolence for the family of Orme; Hazel May