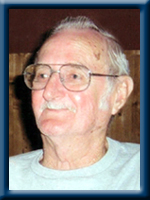 Born in Liverpool, he was a son of the late Charles and Jennie (Whynot)(Schrader) Orme.

Eddie worked for a time with Earl Amirault Electrical before moving on to the Town of Liverpool, first as a temp, then as a full time labourer in March 1968. He advanced through the years to a heavy equipment operator then later as a foreman, a position in which he retired from in March 1996. During the course of his work with the Town of Liverpool, he surveyed on Coffin Island. Eddie was an avid outdoorsman enjoying hunting and fishing with his family and friends, especially in the back country around Milton, Little Kenny Hill Brook, the upper regions of Five Rivers Brook and the Old Garden Road. He loved animals, especially the family pet, and going for drives with Hazel and “Bear” on a Sunday afternoon.

He is survived by his wife of 57 years, Hazel (Jollimore); his daughter Eleanor (Sherman) Roberts, White Point; his sons, Wayne (Wendy) and Terry (Donna), both of Milton; grandchildren Jacob Roberts, Nicolas Pinhey-Orme and Benjamin Orme.

He was predeceased by granddaughters, Danielle and Sarah; sisters Eleanor and Ruth; brother, John “Jack”; half sisters Jessie and Shirley; half brothers, Clyde, Andrew, Ronald and Virgil.

Cremation has taken place under the direction of Chandlers’ Funeral Home, Liverpool where a funeral service will be held Thursday, May 22, 2014 at 11:00 a.m. Burial will be in Milton Community Cemetery. Family flowers only. Donations may be made to the ALC Unit of Fisherman’s Memorial Hospital, Lunenburg or to a charity of your choice. Online condolences may be made to www.chandlersfuneral.com

Offer Condolence for the family of Orme; Charles Edward