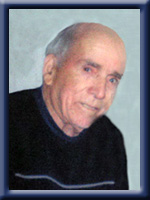 OLIVER, William Otis (Bill), 90, life-time resident of Milton, Queens County, passed away peacefully at home on September 29, 2011.
Born in Milton on May 9, 1921, he was the youngest child of George Llewellyn Oliver and Muriel Rebecca (Boyd) Oliver.
He was the last surviving member of his family. In his early years, he worked in the woods and throughout his life always had a deep connection with trees and nature. He was gratefully employed with Bowater Mersey Paper Mill, and retired in 1983 after 40 years of service. He was the last active founding member of the Milton Canoe and Camera Club.
He is survived by his wife of 59 years, Vera (White) Oliver, daughters, Barbara (Stephen) DeLong, Lower Branch, Linda Oliver-Parks (Gary Parks), Second Peninsula, Cathy Oliver (William Nycum), Tremont, and son, Stephen (Christine) Oliver, Milton, along with grandchildren, Emily DeLong, Michael Parks, Matthew Parks, Riley Oliver, and Bailey Oliver. Also survived by sisters-in-law, Muriel “Dugie” Oliver and Dorothy Oliver, and many nieces and nephews.
Besides his parents, he was predeceased by sisters, Nora Whynot, Muriel Whidden, Vesta Huskins, Evelyn (in infancy), and brothers, Perry, Ernest, and Lyman “Russ”.
Arrangements are under the direction of Chandlers’ Funeral Home, Liverpool where visitation will be held Sunday, October 2, from 7 until 9:00 pm. and funeral will be held on Monday, October 3, 2011 in Milton Christian Church at 2:00 pm. Reverend Neil Bergman officiating. Burial in Milton Community Cemetery. Family flowers only. Memorial donations may be made to Milton Christian Church or Milton Canoe and Camera Club. Online condolences may be sent to the family at www.chandlersfuneral.com.

Offer Condolence for the family of Oliver; William Otis