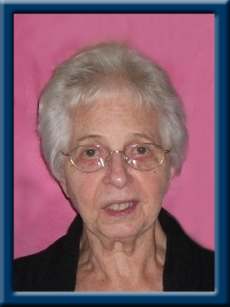 It is with heavy hearts that the family of Vera Marguerite Oliver, 86, of Milton, Queens County, announce her passing on Monday, February 12, 2018, in Queens General Hospital, Liverpool.
Born in Brooklyn on September 17, 1931, she was a daughter of the late Harry and Selena (Finch) White.
Vera was a lifetime resident of Queens County and was the last surviving member of her immediate family. She spoke fondly of her days as a telephone operator. Vera will be lovingly remembered as a kind person, a devoted daughter, a devoted wife and a devoted mother.
Vera is survived by her daughters Barbara Oliver of Bridgewater, Linda Oliver-Parks of Second Peninsula, Cathy Oliver (Bill Nycum) of South Tremont, her son Stephen (Christine) of Milton; her grandchildren Emily DeLong (Ian Gosbee), Mike Parks, Matt Parks (Sue Chadwick), Riley Oliver and Bailey Oliver and her great grandson Rylan Gosbee.
Vera was predeceased by her husband of 59 years, William “Bill”, her son in law Gary Parks and her siblings Alice, Irene, Hilda, Doris, Bill, George and Bernard.
Cremation has taken place under the direction of Chandlers’ Funeral Home, Liverpool. A graveside memorial service will be held on Saturday, February 17, 2018 at 11:00 a.m. in Milton Community Cemetery. Reverend Russell Prime officiating. No flowers by request, donations may be made to the Milton Christian Church or to Queens General Hospital Foundation. Online condolences may be made to www.chandlersfuneral.com

Offer Condolence for the family of Oliver; Vera Marguerite