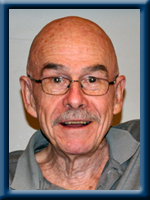 OICKLE – John David, 77, of Milton, Queens County, passed away peacefully in Ryan Hall, Bridgewater on Thursday, April 23rd, 2015 in the arms of his loving wife and children.
Born in Halifax, he was the adopted son of the late Harold and Blanche (Dagley) Oickle.
John was a former Canada Manpower employee in Liverpool having worked with the department for over 33 years. In his retirement, he worked as a chauffeur for the former Bowater Mersey Paper Company in Brooklyn. In his early years, he enjoyed playing baseball, basketball and hockey and coaching hockey. He was an avid golfer until the end. Nothing made John’s face light up as much as when he spoke of his love for his family. A fierce competitor on the floor, the field, the ice and with his disease. Never a quitter and he instilled that in his children.
He is survived by his wife of 50 years Lillian (Roy), his daughter Karen (Clayton) Smith of Brooklyn, his son David (Natalie) of Milton, his grandchildren Jennifer Smith (Ryan Neilson) and Darren Smith, Keegan and Norah Oickle, his sister Grace Chaban of Brantford, ON, and his brother John (Karen) Burchell of Brule, NS.
He was predeceased by his brother George.
Cremation has taken place under the direction of Chandlers’ Funeral Home, Liverpool where a visitation will take place on Sunday, May 3rd, 2015 from 2 until 4 p.m.. A private family graveside will be held at a later time. Family flowers only, donations may be made to the Parkinson’s Society of Nova Scotia. Online condolences may be made to www.chandlersfuneral.com

Offer Condolence for the family of Oickle; John David