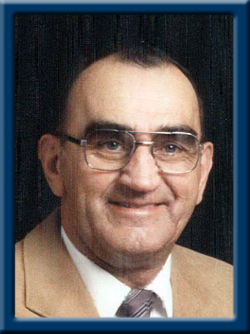 OICKLE – Harris Winford, 85, of Liverpool, Queens County, passed away peacefully on Saturday, September 10, 2016 in South Shore Regional Hospital, Bridgewater, NS
Born in Liverpool, he was a son of the late Winford and Beulah (Martin) Oickle.
During his early years, Harris was a former employee on the Queens County Dairy Production Line. He moved to plumbing and heating, working with Percy Mouzar for ten years before working with Whynott’s Plumbing and Heating Services until his retirement. In his spare time, he enjoyed woodworking. It has been said that Harris had been in many homes throughout Liverpool and surrounding area either fixing the plumbing and heating systems or installing cabinets he had made.
He will be lovingly remembered as a kind and gentle man by his family and friends.
Surviving are his daughter Deborah Smith of Lower Sackville, his sons Brian (Kendra) and Kevin, both of Liverpool. His grandchildren Brandon Smith, Kayleigh Smith (Josh Zwicker), Jesse Oickle (Mariah Farquhar), Mikayla Oickle and Kristen Oickle; his great-grandchildren William, Celeste and Chloe Zwicker and his special companion Audrey Rafuse of Danesville.
He was predeceased by his wife Beulah (Conrad); his sisters Marion MacDonald, Rachael, Florence Rafuse, Clara Whynot, Ruth MacKellah and, Rosie Huphman and his brothers Oscar, Wilson, Ralph, Lloyd and one in infancy.
Cremation has taken place under the direction of Chandlers’ Funeral Home, Liverpool, NS where visitation will be Thursday evening (September 15, 2016) from 7:00 p.m. until 9:00 p.m. Funeral service will be Friday, September 16, 2016 at 11:00 a.m. from Trinity Anglican Church, Liverpool. Reverend Bonnie Baird officiating assisted by Reverend Judy Cross. Reception to follow. Burial will be in Trinity Anglican Cemetery, Liverpool. Family flowers only, donations may be made to Trinity Anglican Church or to the Parkinson’s Foundation. Online condolences may be made to www.chandlersfuneral.com

Offer Condolence for the family of Oickle; Harris Winford