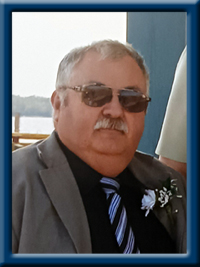 Born in Liverpool, Fred was a son of Marie (Morton, Oickle) Langille and the late Gerald Oickle.

Fred was a kind, hard working man who was always willing to lend others a helping hand. He loved his family and it was this love that saw him return to Liverpool after a short time in the navy, he was honorary discharge to be able to help look after his ill father and to be there for his mother. He then decided to stay and start a family and married the mother of his three children, Janette (Laurinat, Oickle) Tielsch. Fred was determined to provide for his family and started a window cleaning business before being hired at Stenpro, where he worked as an iron worker before becoming a boiler operator. Fred later worked at Mersey Seafood for a short time again as a boiler room operator before going to work at the Bowater Mersey Paper Company where he spent the bulk of his working career. Fred believed in improving his skills by learning and pursuing education in his field. Over the course of his career at Bowater he achieved numerous safety course certificates and was qualified as a forklift operator, boom truck operator, straight truck operator, overhead travelling crane operator, rigger, millwright, mobile crane operator, a hazmat technician, certified stationary engineer and third class power engineer. He was also a member of Bowater’s fire brigade.

Fred was never happier than when he was working outdoors on his woodland, hunting or trapping with his son Steven beside him. He had a very soft spot in his heart for children and they could easily get themselves wrapped around his finger. It was so heart warming to see him interact with his grandchildren and other children he would meet. Fred loved all animals, but was especially fond of cats. His natural ability to fix and solve problems was beyond exceptional and a talent that could not be taught.

Cremation has taken place under the direction of Chandlers’ Funeral Home, Liverpool. Fred was a baptized Jehovah’s Witness and a loving member of the Liverpool congregation. A memorial service will be held on Saturday, February 4th, 2023 at 2:30 pm, at the Liverpool Kingdom Hall of Jehovah Witnesses. No flowers by request. Donations may be made to the SHAID Tree Animal Shelter or to the Canadian Mental Health Association. To share memories or condolences, please visit www.chandlersfuneral.com

The family would like to thank the doctors and nurses at Queens General Hospital, with a special thank you to Dr. Burill and nurses, Lee, Megan, Joy and Leah whose care and compassion made it easier for the family to deal with the last few days of Fred’s life.

Offer Condolence for the family of Oickle; Frederick Alan