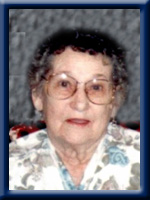 NORMAN – Nellie P., 82, of Liverpool, passed away peacefully in Queens General Hospital, Liverpool on February 22, 2004 with her family by her side.
Born in Mill Village, she was a daughter of the late Burton and Irene (Hiltz) Vaughan.
Nellie owned and operated Nellie’s Snack Bar on White Point Road in her early years. She was an avid bingo player and enjoyed playing cards with her friends, cooking, watching her regular soap operas, spending time with her family and was very fond of her grandchildren and great grandchildren.
At the time of her death, she was survived by her husband Lloyd of Liverpool; daughters Janice (Dean) Aulenback of Liverpool, Dorothy (Dennis) Peach of Aylesford; son George (Sylvia) of Liverpool. Many grandchildren and great grandchildren and several brothers and sisters.
She was predeceased by her infant son Ronald Frederick and several brothers and sisters.
Cremation has taken place and a memorial service for Nellie and Lloyd will be held on Saturday, April 30th, 2011 at 2:00 pm. From Chandlers’ Funeral Chapel with Reverend Judy Cross officiating. Both will be interred together in Trinity Anglican Cemetery, Liverpool.

Offer Condolence for the family of Norman; Nellie Pauline