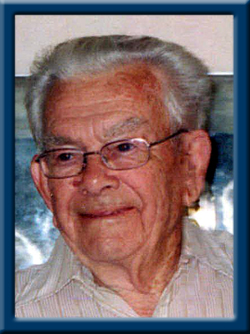 NICKERSON – William O., 101, of Liverpool, passed away peacefully at home on Sunday, May 29, 2016.
Born on Cape Sable Island, he was a son of the late Jeremiah and Lillian (Penney) Nickerson.
Bill was a seaman for Markland Shipping Company before going to work in the electrical department of Bowater Mersey Paper Company where he remained until his retirement after over 40 years service. He was instrumental as a founding member of the Liverpool Fire Department and received his 50 year medal of service. He was a member of Zetland Lodge #9, A.F. & A.M. Liverpool and received his 50 year jewel and a member of the International Brotherhood of Electrical Workers (IBEW) and received his 50 year medal. He served as a corporal in the Canadian Army Reserves. In his spare time, he enjoyed gardening and travelling as well as spending time with his family in Ponhook at the trailer.
He is survived by his wife of 80 years, Roberta (Brown); his son Peter (Eileen) of Beaverbank; his grandchildren Kerri Nickerson (John MacNeil); Stephen (Christine) Nickerson; David Nickerson (Robyn White) and great grandchildren Olivia MacNeil and Mariah Nickerson.
He was predeceased by his son Michael; his grandson Christopher and his sisters Etta Wood and Lillian Grant.
Visitation will be this evening (Wednesday, June 1, 2016) from 7 until 9 p.m. in Chandlers’ Funeral Home, Liverpool. Funeral service will be Thursday, June 2, 2016 at 2:00 p.m. in Chandlers’ Funeral Chapel, Liverpool. Reverend Dr. Steven Hopper officiating. Reception to follow. Interment will be in Zion United Cemetery, College Street, Liverpool. Family flowers only, donations may be made to any charity. Online condolences may be made to www.chandlersfuneral.com

Offer Condolence for the family of Nickerson; William “Bill” Ormand