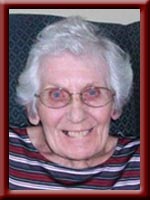 Born in Bridgewater she was a daughter of the late Mervin and Ruth (Wagner) Knox.

Betty served in the Air Force. After leaving the Air Force she worked at the General Store in Brooklyn until it closed. She was a devoted member of the Pilgrim United Church, sang in the choir and was a member of the UCW. Betty loved animals, especially her Beagles.

She was predeceased by her husband Aubrey, sisters Kathryn, Joan and Margot, brother Thomas and infant brother Douglas.

Visitation will be held   Wednesday, May 19th, 2010  from 7:00 until 9:00 p.m. and  funeral service will be held Thursday, May 20th, 2010 at 11:00 a.m. both in Chandlers’ Funeral Home, Liverpool. Reverend Vivian Moores officiating. Burial will be in Seaside Cemetery, Brooklyn. Family flowers only. Donations may be made to Queens SPCA, S.H.A.I.D or to a charity of Choice. Online condolences may be made at www.chandlersfuneral.com

Offer Condolence for the family of Nickerson, Ruth Elizabeth “Betty”