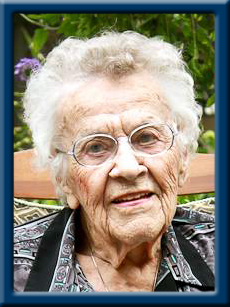 NICKERSON – Roberta “Bertie” A. 99, of Liverpool, passed away peacefully at Queens Manor, Liverpool on Sunday, October 1, 2017;
Born in Milton, she was a daughter of the late Cecil A. and Abbie (Freeman) Brown.
Bertie was a former nurses aide at Queens General Hospital for a number of years. She was a member of the Liverpool United Baptist Church where she served on the Ladies Auxiliary and sang in the choir She was also was a member of the Order of the Eastern Star. She and her late husband, Bill, enjoyed travelling and spending time at their trailer at Ponhook. In her spare time, Bertie knitted, crocheted and enjoyed baking.
She is survived by her son Peter (Eileen) of Beaverbank; her grandchildren Kerri Nickerson (John MacNeil); Stephen (Christine) Nickerson; David Nickerson (Robyn White) and great grandchildren Olivia MacNeil and Mariah Nickerson.
She was predeceased by her husband of eighty years, William “Bill”, her son Michael; her grandson Christopher, her sister Thursa Thompson and her brothers Woodrow and Enoch.
Visitation will be Wednesday, October 4, 2017 from 7 until 9 p.m. in Chandlers’ Funeral Home, Liverpool. Funeral service will be Thursday, October 5, 2017 at 2:00 p.m. in Chandlers’ Funeral Chapel, Liverpool. Reverend Dr. Steven Hopper officiating. Reception to follow. Interment will be in Zion United Cemetery, College Street, Liverpool. Family flowers only, donations may be made to any charity. Online condolences may be made to www.chandlersfuneral.com

Offer Condolence for the family of Nickerson; Roberta “Bertie” Allene