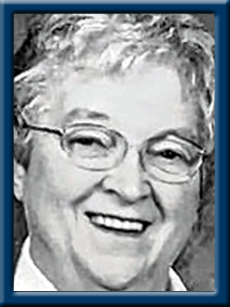 Mary passed away peacefully in St. Vincent’s Nursing Home on July 3, 2021.
Mary was born in Riverfield, Que., on July 18, 1935. She met her husband Robie while attending MacDonald College in Sainte-Anne-de-Bellevue, Que., and they were married in Howick, Que., on August 16, 1958.
Mary taught school in Clementsvale for a short time before leaving to raise her family. She was a member of Caledonia United Church and a UCW and WINS member for many years. She enjoyed all crafts especially quilting. Mary excelled in sports while attending school and college; particularly hockey and basketball and later played softball for the Sure Shots in Noel, Hants Co.
She is survived by her husband, Robie of 63 years; daughter, Heather (Jim Pelham); grandchildren, Nick Ross (Dana), Chris Ross, Kelsey Ross, Josh Pelham (Emily), Jenna Todd (Andrew), Jake Pelham (Emily), Jordan Pelham (Erin); step grandson, Jason Ross (Nicole) and nine great-grandchildren. She is also survived by her sisters, Elizabeth Ariano in London, Ont.; Marion Smith, Bedford; as well as many other extended family members.
Mary was predeceased by daughter, Shelley (Ross) Murray; sister, Janet Elliot; and brother, James McKell.
Cremation has taken place and a Celebration of Life will take place at Middlefield-Pleasantfield Community Cemetery on Friday, October 29, 2021 at 2:00 p.m.. Memorial donations can be made to Caledonia United Church.
Our family would like to thank Closing the Gap Homecare and St. Vincent’s Nursing Home for their care and support the last few years.

Offer Condolence for the family of Nickerson; Mary Minerva