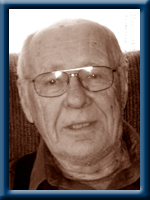 Born June 30, 1929, in Oak Park, Shelburne County, he was a son of the late Guy and Annie Mae (Francis) Nickerson.

Al was a finishing department employee at Bowater Mersey Paper Company Limited retiring in 1987. He was a member of the Canadian Paperworkers Union, Local 141, a member of Acadia First Nations and an amateur radio operator. Al was an avid outdoorsman and spent his leisure time hunting, fishing and trapping. When salmon were plentiful on the Medway River, Al would cast one of his “Nickerson Special Flies” and was usually rewarded with supper. He also enjoyed woodworking and gardening.

He was predeceased by his wife Joyce Iona (Winters), sisters Joanne Nickerson and Gertie Crowell, brothers Leonard and Royce.

Cremation has taken place under the direction of Chandlers’ Funeral Home, Liverpool. A private family service will take place at a later date. No flowers by request. Donations may be made to the IWK Health Centre Foundation, Heart and Stroke Foundation of Nova Scotia or to a charity of your choice. Online condolences may be made to www.chandlersfuneral.com

Offer Condolence for the family of Nickerson; Alpheus “Al” Guy